If you’re about to buy a smartwatch at the moment, I suggest that you consider Fitbit Blaze. First of all, it’s the latest smartwatch launched by  Fitbit – the top brand of fitness devices! And secondly, the Blaze combines all advanced features of a smartwatch and a fitness tracker. Today I’m gonna give you useful information about the Fitbit Blaze, its pros and cons as well as compare it with some other similar devices. Hopely this review will help you make a well informed and wise buying decision. 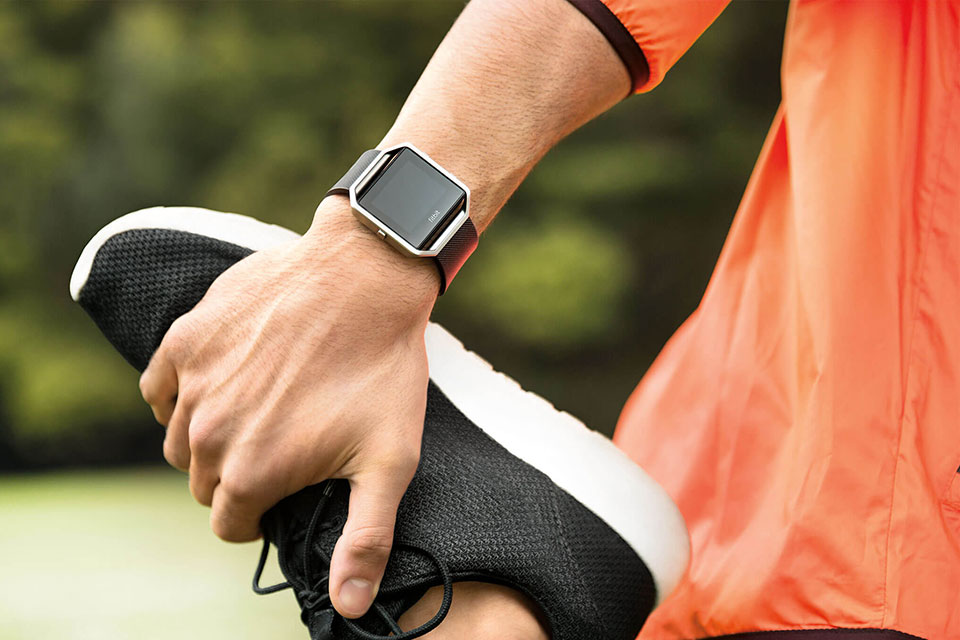 Fitbit Blaze, the second attempt of Fitbit in smartwatch market, was released in January, 2016. Their first attempt was the so-called superwatch Fitbit Surge which was released earlier in 2015.

Fitbit Blaze: What’s in the box? 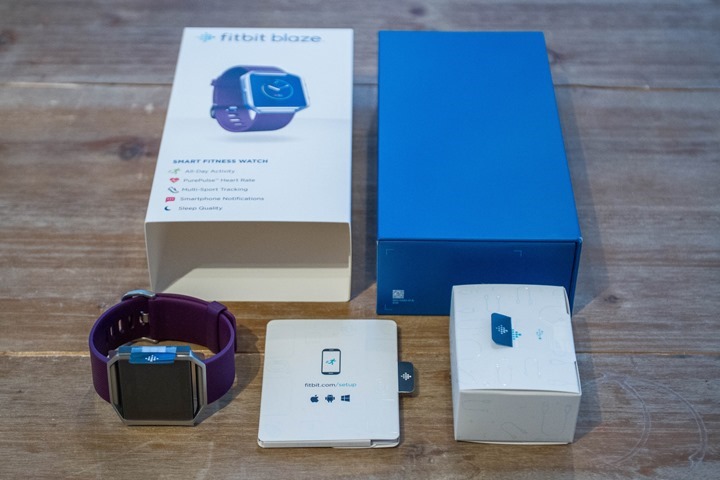 While it was hard to tell if a Fitbit Surge was a smartwatch or a fitness band, the Fitbit Blaze definitely looks like a smartwatch.

The screen sports a very unique design. In contrast with rounded watch often be seen with other smartwatches, the Fitbit Blaze screen is square with angular finish. It’s 1.66-inch, 240 x 180 LCD color touchscreen and is coated with Gorilla Glass 3 for an extra layer of durability. This certainly is a much more attractive design than the monochrome 1.25-inch LCD touchscreen of the Fitbit Surge. However, the Fitbit Blaze is not a patch on Apple Watch in terms of desi, since Apple Watch uses OLED screen technology with a Sapphire crystal glass protection. 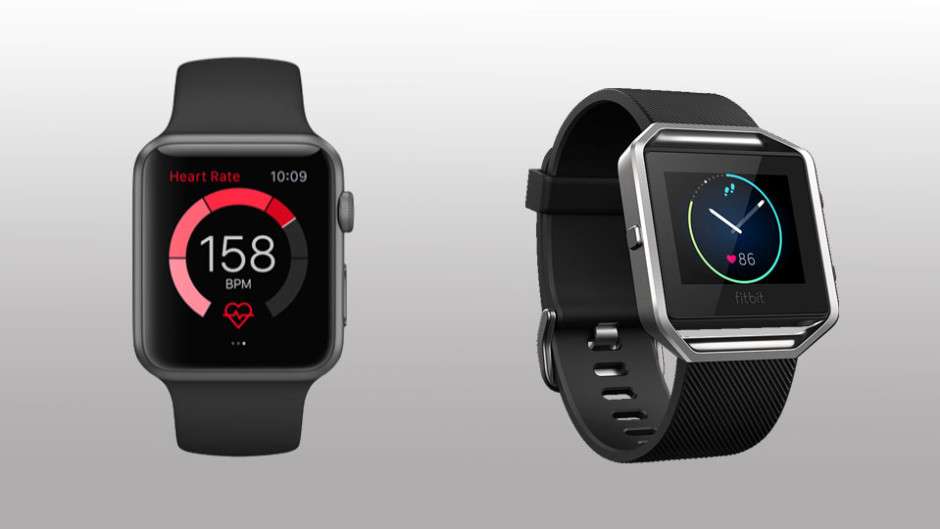 What I like about the Fitbit Blaze design is its exchangeable band. The default band is elastic and comes in 3 colors: black, blue, plum. You can customize your watch by snapping it into another elastic band (+$15), a leather band (+$50) or metal band (+$130). The band is slim and comfortable to wear all day and night. 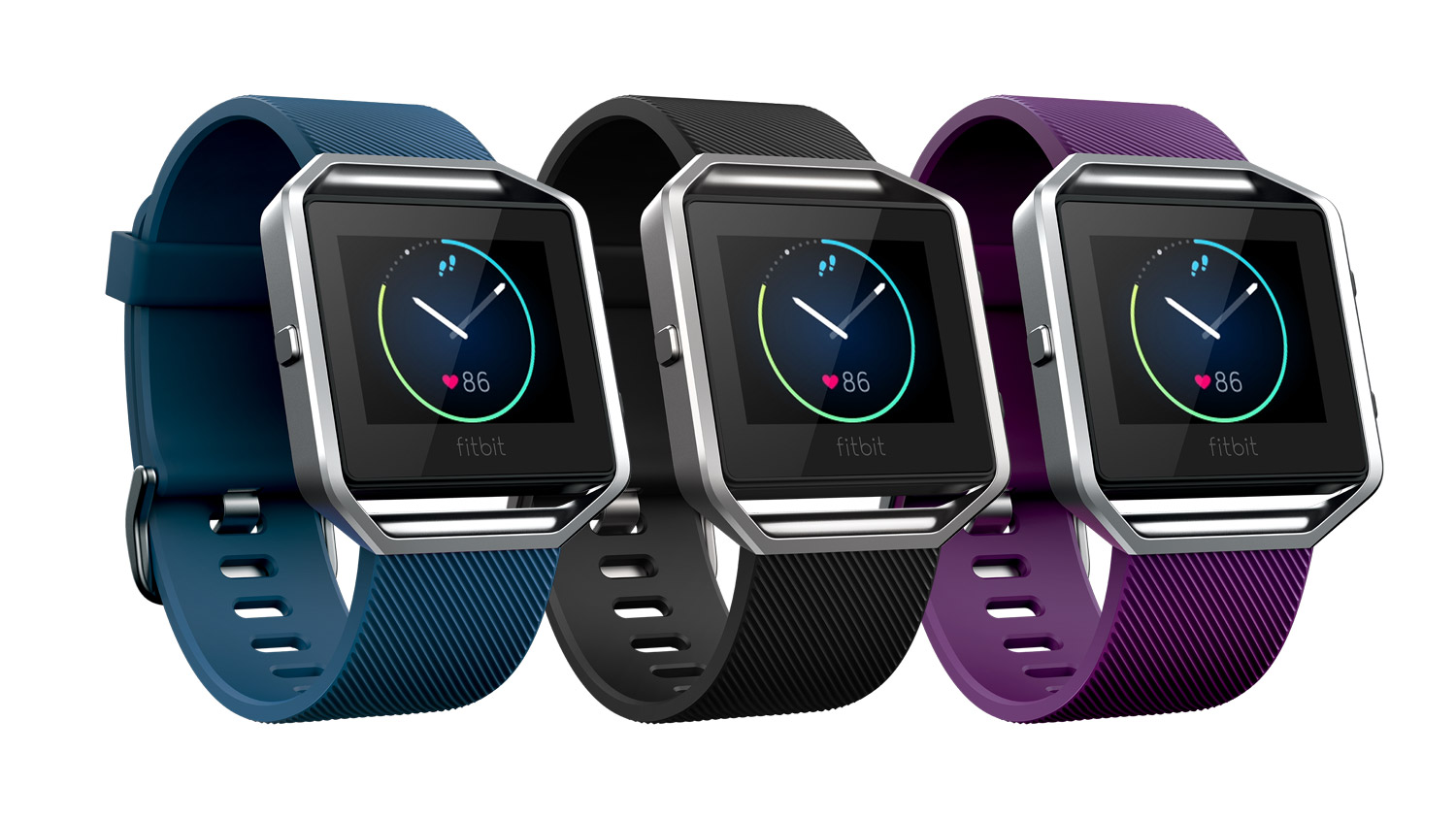 Fitbit Blaze has a 3-axis accelerometer, gyro sensor and an altimeter to track elevation.

Activity tracking: It automatically tracks steps, calories, floors climbed, active time. You can choose a specific activity from the list and hit start or just workout.  The SmartTrack feature will automatically recognize what activities you’re doing. A very special helpful feature of Fitbit Blaze is Fitstar, which shows you work out guides right on-screen. Just follow a 7 minute all-body workout or 10 Minute Abs session whenever you’re free, it’s fun and will make you sweat. 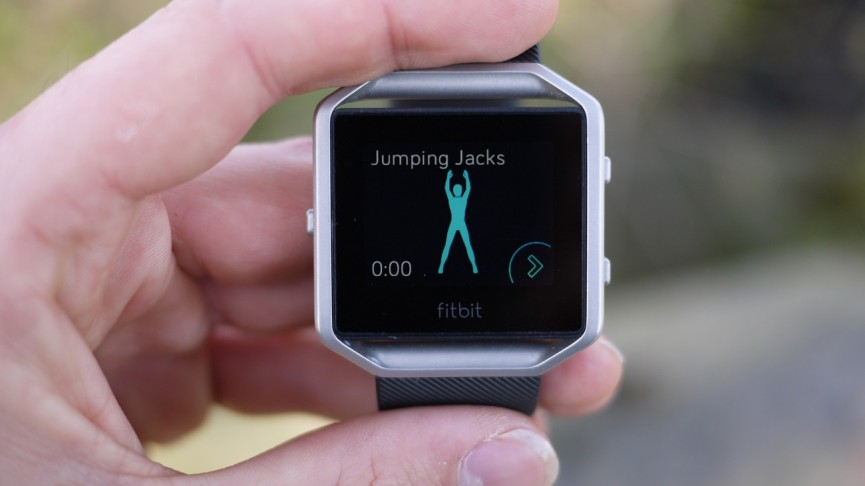 Sleep tracking: It’s done automatically and seems to be quite accurate. This feature can be found in almost current fitness trackers, however be noted that Apple Watch has no sleep tracking feature. 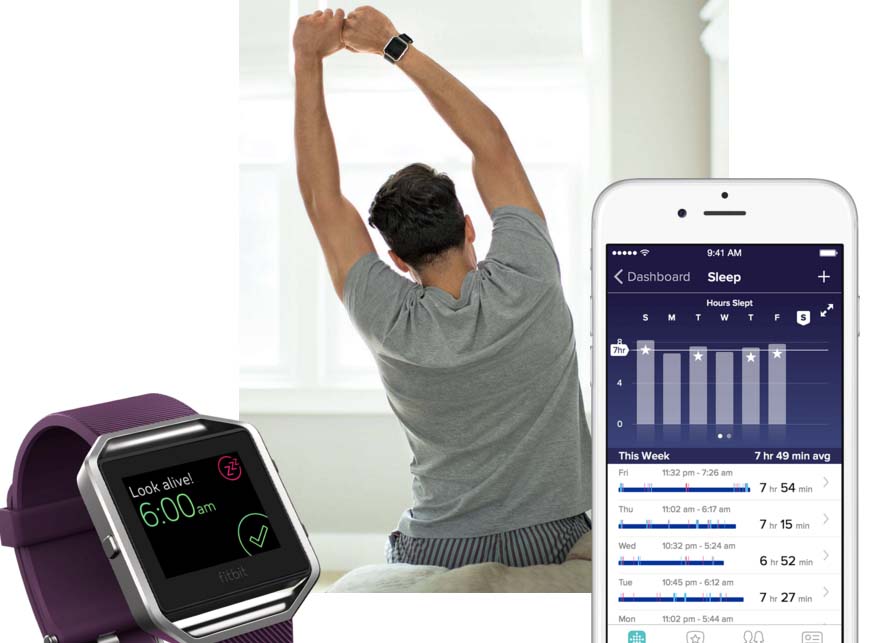 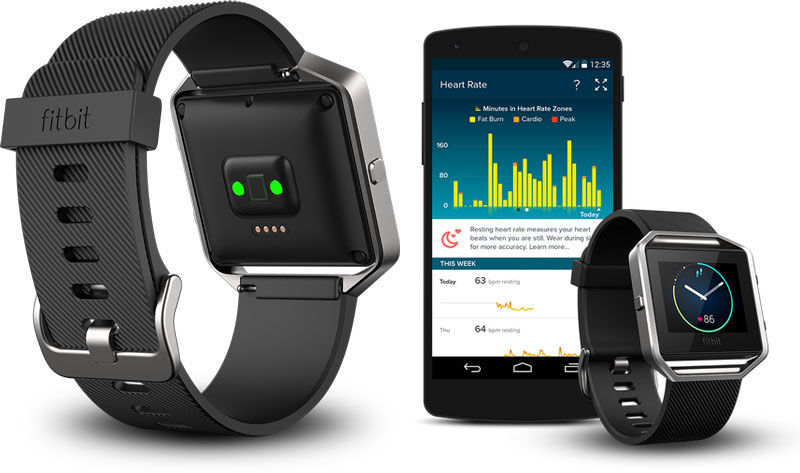 Battery life: Of course it depends on which features you use and screen brightness setup, but many reviewed that Fitbit Blaze can really last to 5 days as announced, same battery life as the Fitbit Charge 2. This is much better than the Apple Watch when you need to charge it daily. To full charge the Blaze from 0%, it takes about an hour.

Waterproof: Like most of other Fitbit devices, Fitbit Blaze is not safe for showering or swimming. It’s said to be water resistant up to 1 ATM, which should withstand hand washing or hold up for a run in the rain though.

Laggy data: Another minus of Fitbit Blaze is that is has difficulty handling high intensive activities. When we up the intensity, it struggles to deliver accurate readings instantly.

No built-in GPS: You’ll need to piggyback with your phone if you want to track your runs or bike rides. The Apple Watch and Fitbit Charge 2 have the same cons. If you really care about having built-in GPS smartwatch, Fitbit Surge might be a better choice.

Notification: With the Blaze, you’ll be able to do things like reject or accept calls, receive notifications from emails and control music playback. In terms of smartwatch features, Fitbit Blaze cannot out-muscle Apple Watch. It doesn’t support Facebook, Snapchat, Twitter or other notifications. You can’t answer your calls on Fitbit Blaze, although you can see who is calling.  However, you will need to use your smart phone to make a phone call.

If you’re not really sure whether a fitness band or a smartwatch would fit your needs better, my advice is to choose the Fitness Charge 2. It has the same functions that Fitbit Blaze offers and is $50 cheaper. Here’s my review of Fitbit Charge 2 Pros and Cons.

If your desire is to have a smartwatch, take your pick from these 3 options. Want a sports watch for running? Aim for the Fitbit Surge. Need a smart watch with smart notifications and a lot of apps to play around with? Then the Apple Watch is the answer for you, check out my review of Apple Watch). If you are looking for a smart watch with great fitness features at with a $200 budget, you know the Fitbit Blaze is the winner.

I love my blaze. I see a lot of people leave negative feedback on accuracy. I had the same issue at first but what I realized is you need to set your stride length to get the most accurate results.

To avoid all the negative on accuracy maybe point this out in bold to new users.

Hi Lois,
Thanks for stopping by and adding useful tip 🙂

Hey Terry,
If you like “bold” style, Garmin vivoactive HR might be a good choice for you. It’s square, it’s masculine and it has weigh more functions than any smart watch sub-$250. It’s more expensive than Fitbit Charge 2, but you can grab the current sale to buy it at $200. Actually, I’ve just ordered one for my father since he’s a fan of swimming and cycling and this watch is exactly what he wants 🙂