You are here:Home-Polar, Review Best Fitness Trackers-Polar M430: Review of the Pros and Cons for the Best Smartwatch for Runners (Update June 2019)
Previous Next

Polar M430: Review of the Pros and Cons for the Best Smartwatch for Runners (Update June 2019)

What?? Finally a smartwatch specially designed for runners? Yes, here it comes at last, the advanced GPS running watch Polar M430.
This smartwatch is considered to be an updated version of the popular Polar M400, the biggest difference is the wrist-based heart rate monitor. What else can you expect in this newest version? Well, check out my review of M430 pros and cons, comparing it with Polar M400 and other GPS smartwatch such as Garmin Vivoactive HR and the Fitbit Surge. 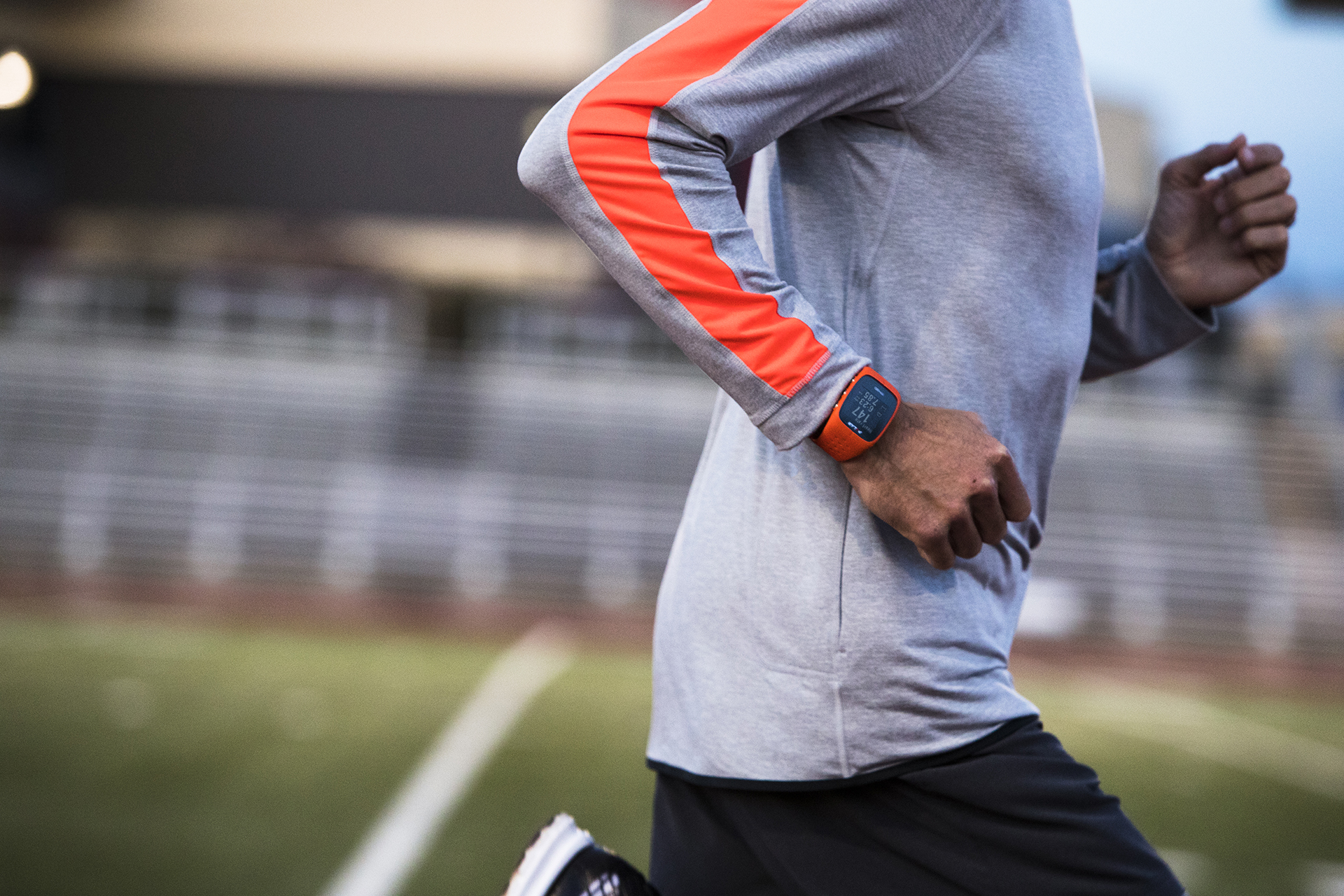 Polar officially announced the release of Polar M430 on their fanpage on May 10th, 2017 – three years after the launching of the forerunner Polar M400 (2014).

Wrist-based heart rate monitors are now all the rage, and Polar knew that if they didn’t upgrade the M400, they would lose their competitive edge battle with Garmin and Fitbit. Last year, these rivals respectively brought out Garmin Vivoactive HR (Feb 2016) and Fitbit Surge (Jun 2016) which were both GPS smartwatches,  equipped with optical heart rate sensors.

At first glance, Polar M430 looks a lot like M400. It retains bold, rounded-square module design with flexi silicone strap. The difference is that it is perforated to be less sweaty and provide better ventilation.
It doesn’t have a black version, but comes in 3 colors: grey, white and orange. It’s a bit lighter than its predecessor, 51g instead of 56.6g.
The design brings you a sporty feel, rather than luxury or high-tech look. 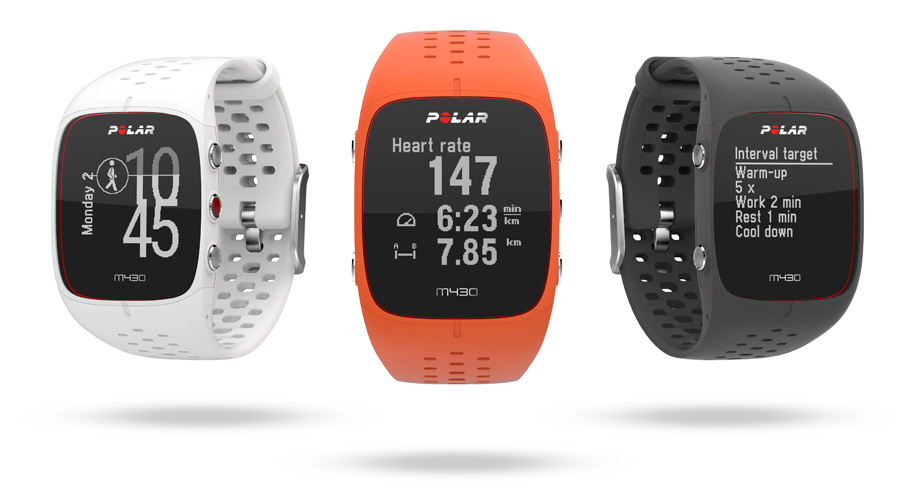 6-LED Heart Rate Sensors
Do you know that Polar was founded by the inventor of the EKG heart rate monitors?  Originally, this company specialized in heart rate monitors and were the innovators of HR monitors used in chest straps made for fitness trackers. These very same heart rate monitor straps still very popular among runners and serious athletes for their accuracy used in training. With this running smartwatch, they integrated a wrist-based heart rate sensor to make it more convenient for the average person to use. The fact that it has up to 6 LEDS while Garmin Vivoactive HR has 3 LEDS and Fitbit Surge has 2 LEDS assures us stability and more accurate data. And if swimming is also your favorite sports, you would be pleased to know that it does measure pulse while swimming. Very few smartwatch out there enable you to do this.

In case you are still concerned about its accuracy, you may connect Polar M430 to other heart rate straps. It’s compatible with Polar H10 and H7 heart rate monitor straps. 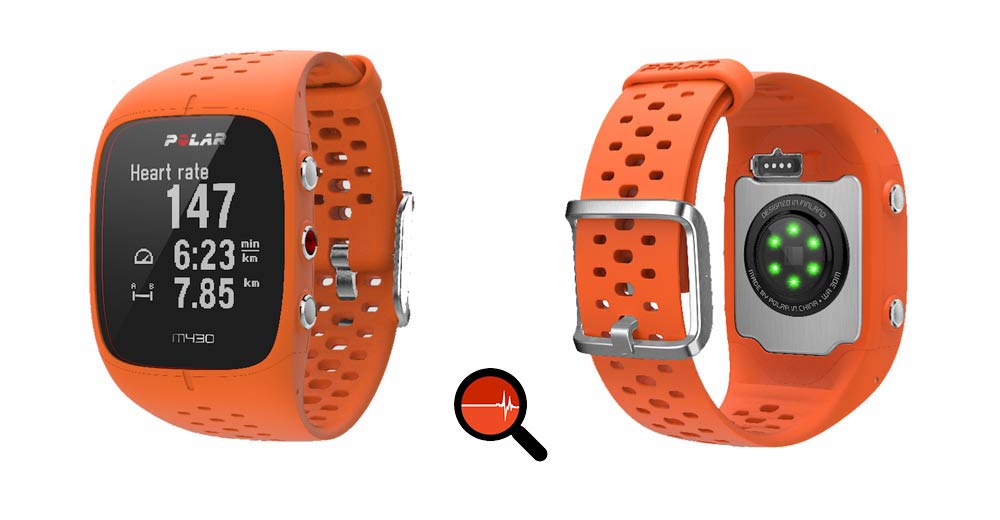 Running Features
Here’s what makes Polar M430 out muscle other competitors:  you can wear Garmin Vivoactive HR or Fitbit Surge for running, as these smartwatches both track your heart rate and calories, but neither can give you useful coaching.  Running index analysis, previously available in Polar M400 was proven very helpful for runners. This newest device takes this one step further, and can even estimate your finish time by interpreting your speed and heart rate data.  Such smart workout instruction is usually found in expensive watch only. 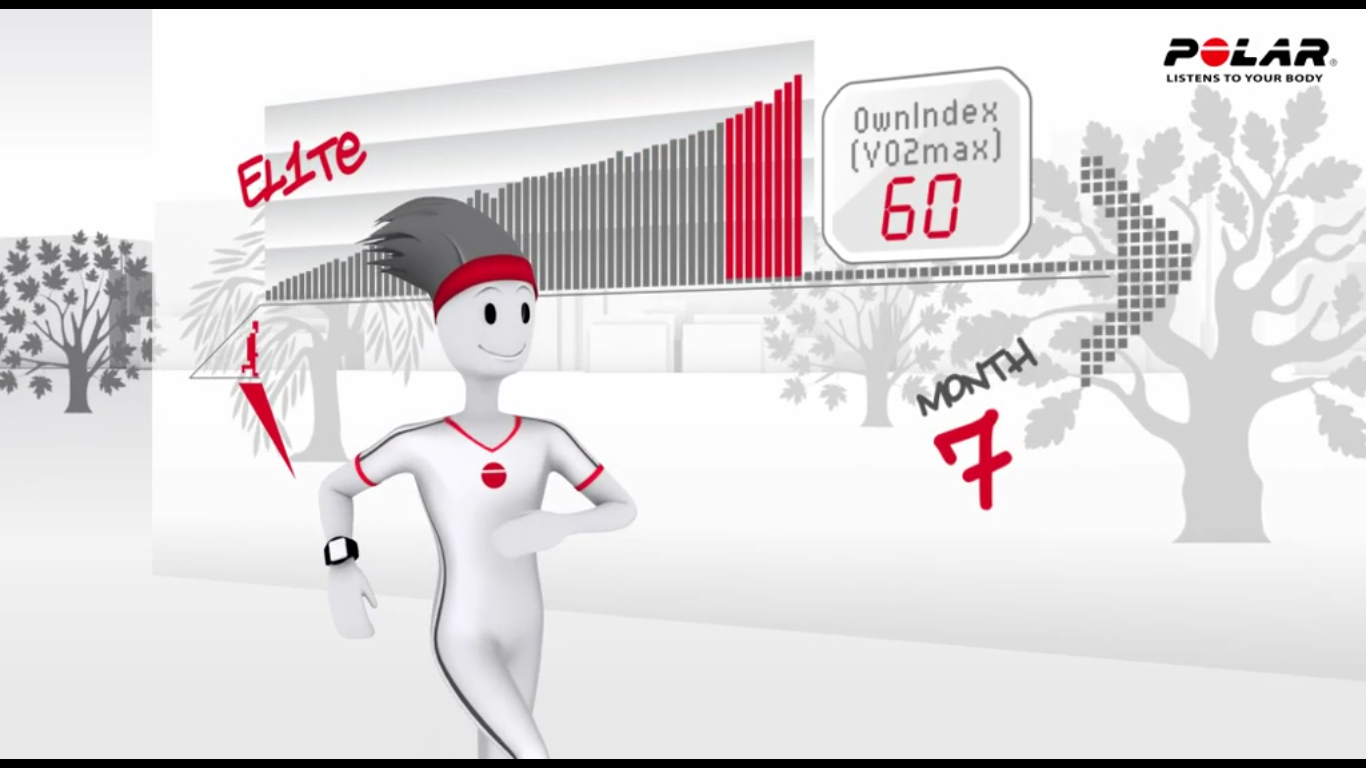 Additionally, Polar M430 offers many other useful features for running such as 5-minute test to check your fitness level. By comparing your test results over time, you will see if your fitness is improving, as the higher v02max indicates a better performance. This fitness test is a new feature that wasn’t available in Polar M400. Another thing that Polar M430 has added is Stopwatch, a feature that is also considered invaluable for serious training.

Long Battery Life
This newest Polar device give up to 30 hours of battery life in low-power GPS mode unheard of at this price point. This improvement definitely makes you happy, as charging is required ess often. The Polar M430 has longer battery life than almost other GPS smartwatches. Garmin Vivoactive HR can work in GPS mode only for 13 hours while the battery life of the Fitbit Surge is only 10 hours at best.

If you use GPS and wrist-based heart rate measurement together, you may need to charge the device after 8 hours. But for purely activity tracking, it can last up to 20 days (a fact provided by Polar on their fanpage).Nevertheless, long battery life obviously a plus of Polar M430.

Waterproof
You sweat a lot when running? Me, too! No big deal, take the Polar M430  swimming or showering. Polar M430 is waterproof to 30m despite that it has a micro USB port. Garmin Vivoactive HR is waterproof too, but the same can’t be said for Fitbit Surge. Fitbit still advises its users not to take the Surge for showering or swimming.
GPS
The running smartwatch Polar M430 uses different GPS technology than the Polar M400. It is integrated GPS with SiRF Instant FixSattellite prediction technology, instead of AssistNow. You can view map on Polar Flow app, too.

Other Features added compared with Polar M400
Besides some of the differences I mentioned above, Polar M430 was upgraded to create a better overall device, become more perfect. Instead of audio alerts, now the device vibrates when there’s a new notification. Memory is also larger, offering 8MB flash memory instead of 4MB. 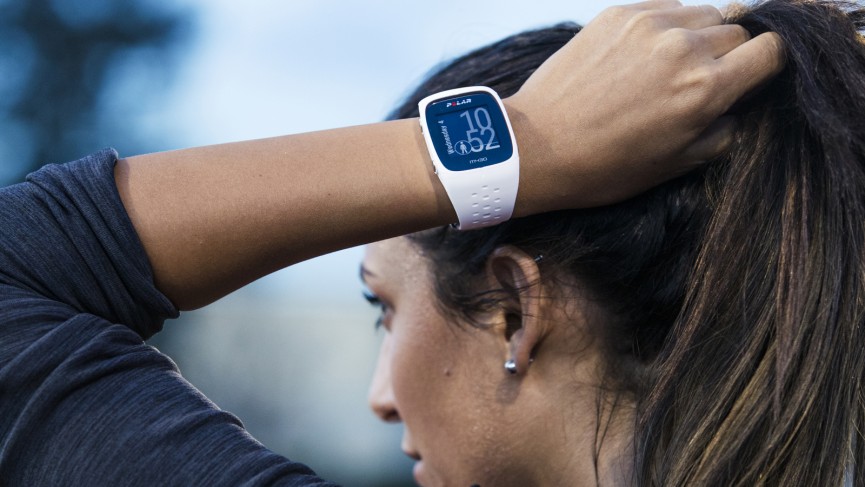 Sleep Tracking
Although Polar M430 was upgraded providing a Sleep feature, it falls short of expectations. While other fitness trackers can give you details of REM, light and deep sleep, the Polar M430 just shows you your total sleep and actual sleep. This data is as helpful as the detailed data provided by other devices.
Monochrome Display
Monochrome display is a trade-off for long battery life, yet 128×128 pixel high resolution display which is not bad.

Honestly, I can’t see any reason why you wouldn’t benefit from the updates and enhancements delivered by the Polar M430. You may find the design is not as aesthetically attractive, but beauty is subjective and hard to define.
By providing accurate heart rate data, running index analysis, GPS and long battery life, it’s crowned one of the best smartwatch for runners on the market today.

Quick as always, bro.
Do you know when is this smartwatch available for shipping? Really want it on Mother’s Day.

Hey Xander,
Deliveries will begin in June, so it’s not possible to get it for Mother’s Day. Sorry, bro.

How does the accuracy measurement of the heart rate compare to the Polar M400?

Hi Rick,
Polar M400 measures heart rate by pairing with H7/H10 monitor strap.
Theoretically, a monitor strap would provide more accurate data than a wrist-based heart rate sensor.
However, you can see this graph which shows that data of Polar M430 is quite reliable.
https://heartratemonitorguides.com/polarm430accuracy/

If you are using the M430 not only for training but also for activity tracking 24/7, you should know that the M430 activity percentages are not at all compatible with older Polar devices. You will reach 100 % with an M430 with about the same activity that an M400 will track as about 60-70 %. So you will reach your activity goals ridiculously easy with an M430. What’s more, the displayed amounts of activity to reach 100% are completely nonsense on an M430. The M430 is a great sports watch to monitor training sessions with HRM/GPS. But when it comes… Read more »

Recieved my M430 yesterday, have had a M400 for a few year, nice watch, first thing I also noticed is the activity percentage is a lot different than M400,So far today it is 9.30am, I walked 2.5km when I got up. Now at work done a little bit of walking already showing that I have done 75% of my activity. Hopefully Polar can change this with a firmware upgrade,